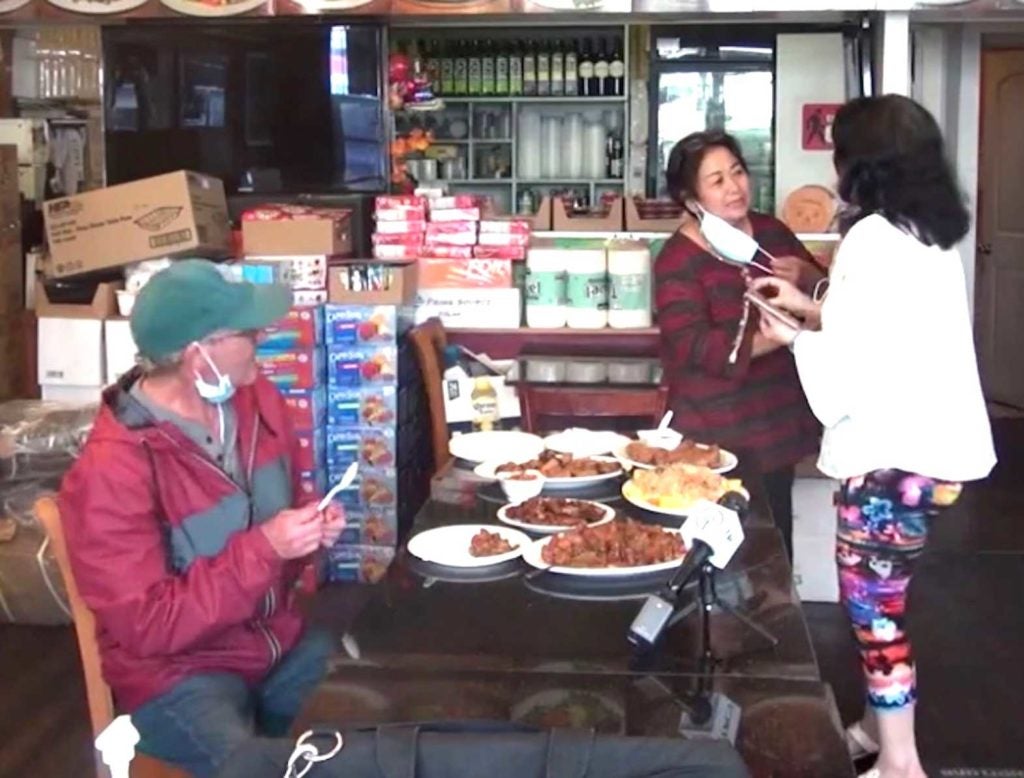 Maharlika chef-owner Elizabeth Angeles (center) got a timely boost from the county-administered program just as the crisis threatened to shut down her popular spot. SCREENGRAB CMQM

DALY CITY, California —  NitaBuena Belgica is thankful for her blessings.  She starts and ends her day with prayer, a custom from her Catholic upbringing and later as a Baptist “planter.”

“Planters” devote themselves to growing and nurturing the congregation, a mission that led Manila-born Belgica and her family to San Diego where they settled down as newcomers in 1999.

Now a grandmother, divorced and starting over in South San Francisco, the 70-year-old gives thanks for the three square meals she has been receiving daily since May, compliments of her fellow taxpayers.

True to its name, Great Plates Delivered (GPD) provides door-to-door lunch, breakfast  and dinner for people 65 years and older who are at “heightened risk” because of the coronavirus crisis and are “unable to obtain or prepare meals on their own while sheltering in place,” says Anna Sawamura, Program Services Manager of San Mateo County Health Aging & Adult Services (AAS).

The Covid-19 pandemic has hit the older population particularly hard in multiple ways.  To prevent infection, Filipino Americans in their sunset years  are struggling to meet their most basic needs, including healthy meals.  Already dealing with loneliness due to physical distance from families and reluctance to ask for help, they face a dire situation.

Local governments have responded to the surge in requests for assistance as businesses shut down and unemployment rose six months ago.  But requirements can be a hindrance to individuals whose Social Security and other pensions hover above the limit. 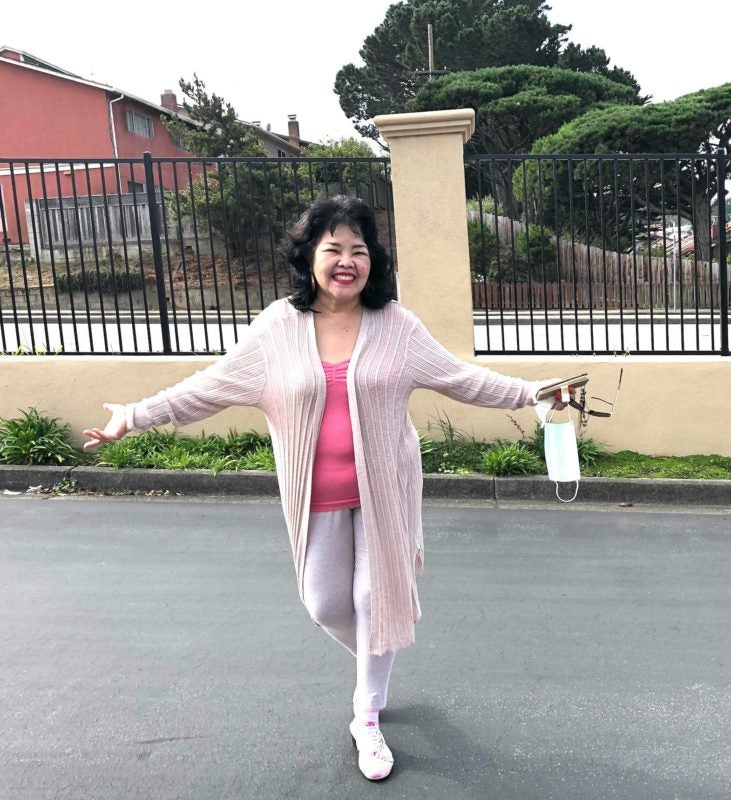 Generally, people who earn no more than 138{d32dd75001b1e4959158a4d7c17e94f6511a5c9ed4724b73c12126b62b27fc87} over the federal poverty level, which is $12,760 for a household of one, $17,240 for 2 and so on,  may avail themselves of state health coverage, housing, food and other assistance. Then there are retired folks who worked all their lives and may be receiving Social Security and employer pension somewhat in excess of the limit and have to pay rent or mortgage, among many expenses.  They might choose to deprive themselves of the most fundamental sustenance rather than risk losing their home, thereby further endangering themselves in the crisis.

Great Plates Delivered has been the lifeline for people who are considered neither low- nor high-income and are often referred to as “middle-income” earners.  To qualify, they would be taking in under $74,940 as a single-person household or $101,460 for a two-person household.  The amount seems high on the surface until the cost of living in the Bay Area is factored in.

The program also provides for people 60 to 64 who have been diagnosed as positive for or have been exposed to Covid-19 or have underlying health conditions.

Qualified participants live alone or with someone who meets the same criteria and are “unable to obtain or make their own meals,” Sawamura reiterated.

They would be ineligible if they are currently receiving state or federal food assistance such as CalFresh or home-delivered meals.  If so, they are cautioned from giving up the benefit in place of GPD, which is an emergency program with a finite date to end.

At press time the program was scheduled to close on October 9, with a “soft landing” or gradual winding down around the end of October, Lisa Mancini, San Mateo County Director of Aging & Adult Services, said at the Sept. 14 meeting of the County Commission on Aging. Three FilAms serve on the 17-member Commission appointed to advise the County Board of Supervisors on issues facing older adults.

A majority of San Mateo County recipients  live in its northern tip or District 5.  Daly City, the most populous town in the county and home to the most Filipino residents per capita in the country, to date has 812 recipients. South San Francisco has 443, San Bruno 182, Brisbane 48, Colma 32, and Broadmoor 1, Sawamura told Inquirer.net.

“North San Mateo County has a tremendous amount of need as the largest city in San Mateo County is Daly City, so I am extremely grateful that the Great Plates committee recognized this (fact),” County Supervisor David Canepa, who represents  the district, told Inquirer.net.

On the other side of the equation, the program has pumped in $12 million into the debilitated restaurant industry.  Some 64 restaurants in San Mateo County alone are contracted to provide the meals.  Sawamura said some were identified and forwarded for consideration to the counties by the state and some were identified by the County Office of Sustainability.

Restaurateur Elizabeth Angeles said she had received an email from the county informing her of the program and guidelines for participation.  The email was a timely boost.

“I was worried because I was afraid my business might collapse,” Angeles, 62, told Inquirer.net while prepping for dinner for her assigned 56 participants.

Since 1992, the Nueva Ecija native has been serving “typical Filipino food” at Maharlika  (Filipino for “nobility”), her restaurant on Mission Street.  Hers is a rare Fil-Am dining spot open till 2 a.m. (it opens at 5 p.m.), offering goat entrees to savor while listening or singing along to a karaoke machine.   As such it is also among those paralyzed, its indoor entertainment silenced and having no space to open outdoor service.

Angeles said she had all the requirements listed and was ready to comply with the “low-sodium, low-sugar, healthy” guidelines of the program.

She receives $66 for each of her 56 participants’ 3 daily meals.

“For breakfast I make ‘silog’ (rice plate with egg and sausage, meat, chicken or fish).   Lunch can be sinigang (meat and vegetable soup) and fried chicken or grilled pork with a salad for dinner,” she gave examples.

Sawamura said participants were asked to choose from a variety of restaurants,  given location, cultural and dietary considerations.  Angeles’  recipients span the Filipino, South Asian and Chinese communities, some vegan or vegetarian, some diabetic, the said.  She cooks the meals herself with a crew composed only of a dishwasher and her two nurse-daughters, Mariliza and Marijoy, promoting the restaurant and helping with deliveries.  She is hard at work at the stove by 5 a.m.

Every day, providers are required to submit a photo of the day’s meals to the county, said Sawamura, whose core staff of 8 includes two Tagalog-speaking Fil-Ams.

“The meals are delicious and the presentation is lovely,” said Belgica, who chose a cafe provider that serves “international” food.  She has breakfast of eggs, toast and hash, chicken or ham sandwich for lunch, turkey with vegetables and soup for dinner. “The portions are perfect; at our age, we can’t eat too much,” she said in her soft voice.

Belgica has been living with a sister since her divorce five years ago, but she flies frequently to Orange County to visit her children and grandchildren.  She is unaware of Human Service Agency provisions for newcomers of her generation.

“My sister is in the know about community life, having worked with the public sector.  She was the one who told me about Great Plates Delivered.  It’s a  good thing I opened my heart to it,” said the former feature writer in the office of Philippine Press Secretary Kit Tatad under the administration of Pres. Ferdinand Marcos. 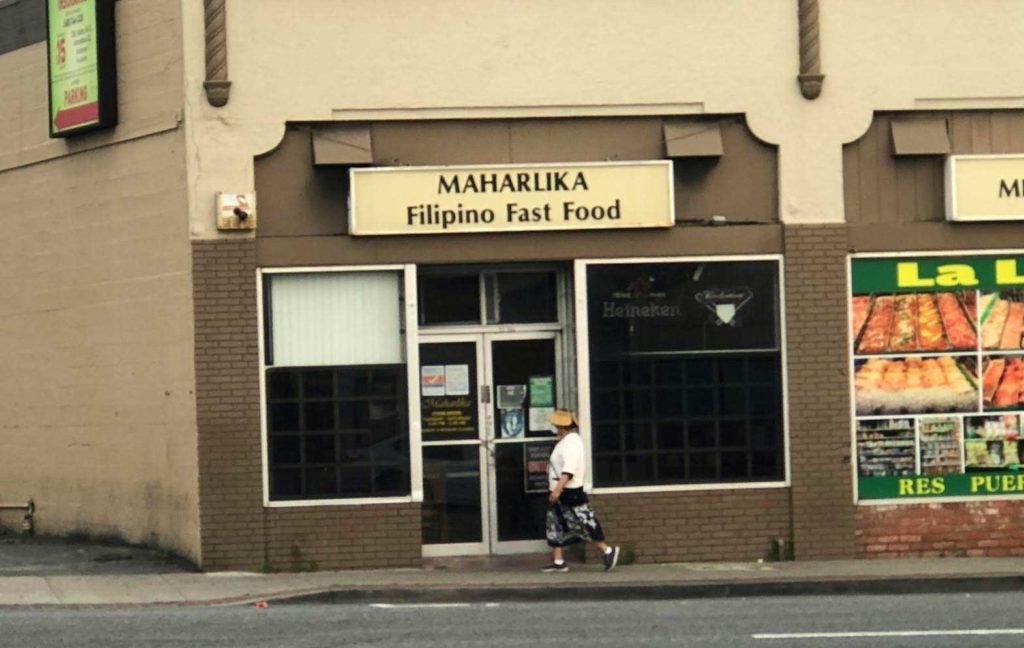 This Mission Street destination was open till 2 a.m. with karaoke and serving goat stew, among many specialties, pre-Covid-19. INQUIRER/CM Querol Moreno

Like Belgica, Angeles is divorced.  Confident and assertive, she has been self-sufficient since relocating in California after living in Chicago, Germany and the Philippines as a military wife.

Both recipient and provider said they are hoping the program will be extended beyond its Oct. 9 termination date as it has been extended at least twice since inception.

“It’s  a month-to-month notification” that would come from the governor when FEMA decides how long the program continues, Sawamura replied when asked about the prospect of another extension.  The “unprecedented situation” has reinforced how hard the County works to support the ”most vulnerable members of the community,” she said, acknowledging the importance of food.

“An extension by the end of the year makes sense and this program has given our food-insecure seniors the food they desperately need. So, I will continue to advocate for this amazing program,” he promised.

Older adults regardless of income who are assessed as homebound or with a disability preventing them from making or getting food may apply for home-delivered meals from the County.

They may call the 24-hour 7-day-a-week Aging & Adult Services Hotline 1-800-675-8437 for information and help identifying the appropriate options for their particular  circumstances. They may visit Network of Care for more information, such as delivery services, financial counseling, and food resources throughout the County.

Don’t miss out on the latest news and information.